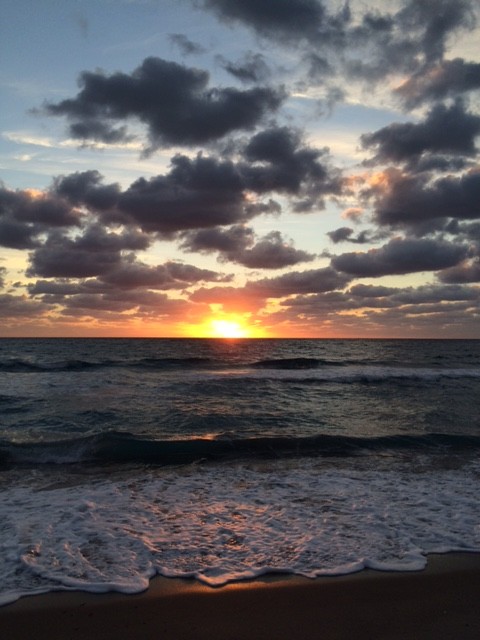 Oxford Dictionaries defines daydreaming as a series of pleasant thoughts that distract one’s attention from the present.  But here I was at the beach watching the sunrise, and yet I was having a hard time being present.  How many times do we do that, allow beautiful moments to pass by without experienceing the whole.  So today my morning meditation became to sit, feel, watch and observe.  As the sun was rising I noticed the ebb and flow of life, ever repeating, as the waves rhythmically came in and then went back out. I notice my breath doing the same… The sand felt cool beneath me, as I began to become warmed by the sun as it continued to rise. I made the connection to the opposites, aware of the waves coming in and out, aware of the rise and fall of the breath, and the hot and cool of the sand and sun. Reminded at the same time of part of Newtons laws of motion, for every action there is and equal and opposite reaction; and, that a body at rest will stay at rest, a body in motion will stay in motion unless acted on by a outside force.  We move through life mostly robotically, just moving through the motions that we’ve set in place. Even when our intention is good, like me going to the beach to meditate, becoming present to what is, allowing myself to just be. Being so caught up in the silent internal meditation that I felt that I needed to do, and then allowing myself just for the pure pleasure of it, to be present with all my senses to that which is truly beautiful, and not just by the visual sight of it. I felt happy and content, aware that I am living the life that I had always dreamed of.   I’m sure, it started as a daydream, and a knowing of the life that I always wanted to live. But just like Newtons law of motion suggest, I had to change to get my different results, not by a physical force, but by a mental shift.

I’ve been living in my home for about three months, before I had the epiphany to meditate at the beach instead of my home that is still in the process of being remodeled. Why it took me three months to realize this – I’m not sure, but it may have been because my home is where I have always meditated before. I now live about a mile away, close enough to walk. But thank goodness I had this sudden realization when I did and the months didn’t turn into years. It didn’t cost me anymore time or money, but just an awaking to the motions that I’ve set in place.

So I ask you today, after you finished your daydreaming, to become so mindfully present to your actions that your going through right now, to the simple awareness – with eyes wide open – of what can you do differently right now by a simple shift, to make part of your dream a reality. 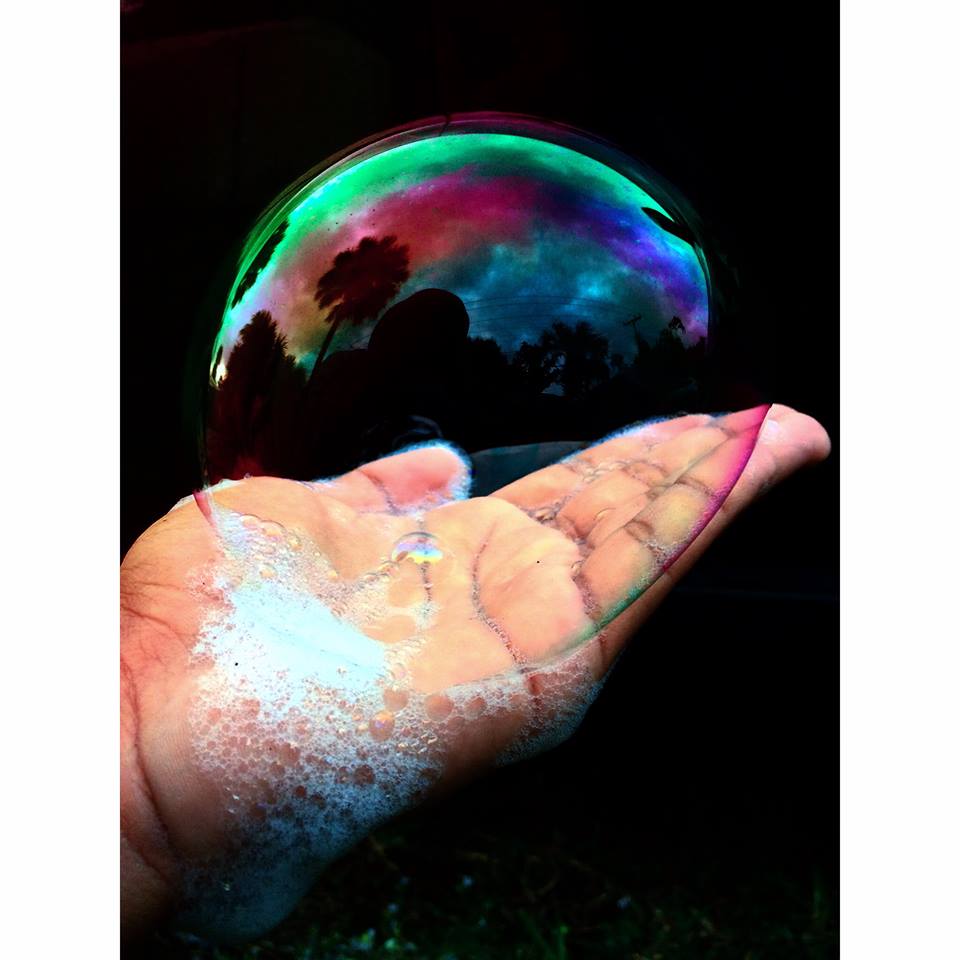 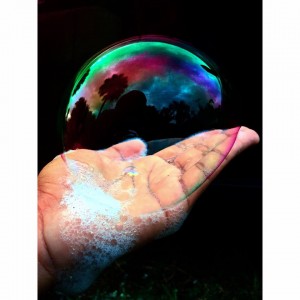 So my exceptional stepson was washing the cars a few days ago, and in the middle of his task he stopped, blew a bubble with the suds, and took this beautiful photo.  What a great reminder to look for the beauty, and joy, in our everyday moments.

That’s it for today. Just simply pause, and enjoy the moment!

“A pure heart open to the light, will be filled with the very essence of Truth.” ~ Rumi

I had an awakening this week, after receiving the gift of a Thai Massage. I felt as if I could feel my prana, energy, vibrating and dancing about. I’ve been told that we’re not solid objects, and for the first time I felt that way. I’ve had massages before and have left feeling wonderful and relaxed, but this was different. The gift giver suggested after, that I go to the beach and sit with my feet in the sand, so I went. I never felt so connected and unconnected at the same time. Within myself I felt as if like i was the center of the universe. And, although there were lots of people around, when I listened for outside sounds, all I heard was the waves crashing in the sand. It was easy for me to keep going inward, and instinctively I new what I should do. When to move, eat, and head home. Honoring myself in the simplistic of terms. When I arrived home I was exhausted, even though it had only been a few hours and even though I had a good nights sleep. Not wanting to lose this feeling, a definite change in my whole being, I just lay still for a few hours.

A week later, I’ve allowed the beautiful essence of this gift to fade. Why is it that we sometimes allow ourselves to default to the place inside us, where we don’t want to be. Why is it so hard for us sometimes. Why do we allow stuff to affect us, when we know better,… habits, I realize, take time to change. So, recognizing the habits, honoring ourselves, and giving yourself the moment to make the shift, is sometimes, the best we can do until the new habit takes form.

Be easy on yourself, but see your truth, see your drama. Let it go, an start shifting your thoughts, and life, to where you really want it to be. Do you really want to live in the drama – step back, step away, turn.  Start focusing on what you want, and how you feel strength, in your peace.

Speaking my truth, with love, and light,